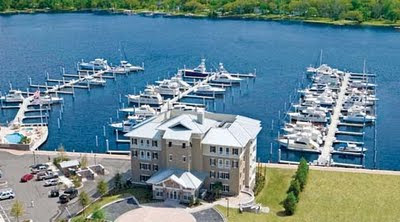 As those of you who follow my blog know I tend to be on the cheap end of things.  I anchor out rather than paying for an overnight slip.  I find the free docks provided  by municipalities for transient boaters.  I frequent military marinas not only for the company of my fellow comrades-in-arms but also so I can use the commissary and post exchange.

The pampering started even before we arrived.  Rather than the normal procedure of calling a marina several times in order to get them to respond they called me as I was clearing the bridge!  Again, instead of the normal "count this many docks and then turn and count ..."  the instructions were clear - "Do you see the dock hand in the yellow slicker?" "Yes."  Like an airplane coming into the terminal there was a dock hand at each spot directing us into our slips.  Backing an 11 ton (Gypsysails is 24 tons) sailboat into a slip is alway an adventure.  With three knowledgeable dock hands handing our lines it was a non-event.

The facility itself is modern, beautiful, and immaculately kept.  It boasts clean modern rest rooms, a free laundry room, free ice and a helpful and a knowledgeable staff.  There is a swimming pool that we have not been able to use due to rain and very cold temperatures.   A real treat for me is the cable TV hookups, I have not had cable either in my old apartment or Reboot for over a year and a half.  There is a modern mall which has a West Marine store and a large variety of other stores a short walk away.  All in all a great place to stop to visit Jacksonville FL and the surrounding area.  Now if we could just get some of the Florida sunshine!
at December 05, 2009