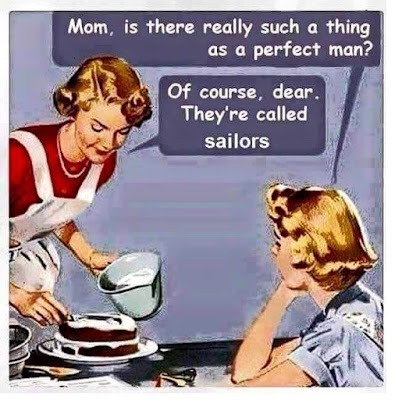 Last night I made the transit from Solomons MD, to Virginia Beach, VA. I was standing in the cockpit and looking through the binoculars at an approaching tug and tow. I was concerned as I had a cargo ship on my port beam at about 1/10 NM passing me. I knew I was going to be in the center of the sandwich. All of a sudden everything went white. I blinked and  put down the binoculars. XO had climbed up on top of the dodger and was standing 3 inches in front of me patiently waiting to be rubbed. Pretty funny.

Email ThisBlogThis!Share to TwitterShare to FacebookShare to Pinterest
Labels: XO

Cruising Budget, how much does it cost (Part 2)

I have been down in Flagler Beach, FL at Bill's house (KI4MMZ.) Those of you who follow my travels know that Bill and Fred are my on shore support team - weather routing, "phone patch" links to my sons, and interfaces to technical support when things on the boat fail.

Bill's home got hit by lightning. The telephone "dmark" was blown 20 feet across the lawn. Bill is a 110% medically disabled vet (he was only 100% disabled, but with the new equipment he has now added an additional 10% as he is still learning how to make it work) so getting around to fix things is difficult for him.

XO and I flew down to help. Of course we got to Reagan National on the day that the ATC system failed for six hours. We got to spend 8 hours in the airport waiting for our plane. Fortunately I had brought the XO diaper bag - food and kitty litter (had to buy water inside security at the airport) so he was comfortable while waiting. We all know he is a very pretty cat and most of the time quite calm. I put him on a short leash and he made some new friends. We thought that the trip would be canceled for sure (the flight full of kids to Orlando on one side and the flight to Bermuda on the other side were both cancelled) but we got lucky. The poor people traveling to Bermuda were offered a re-booking starting three days later (2 seats) and it got worse for them from there. What a way to ruin a vacation.

We arrived at Bill's and started to take inventory of the damage. In a word - everything. Television, home theater, camera system, computer, remote controls for lights, fans, door locks, and most important for me almost all of the Ham Radio equipment. XO was ecstatic to have a big house to run around; much more fun than being on a leash on Reboot.

Since so much equipment was destroyed we took the opportunity to move all of the furniture and deep clean Bill's "operations center." There were various suggestions about moving his bed out to one of the back bedrooms so that we would have more room to party (Haha.) Then we started putting things back together again.

We were able to acquire the more common items - television, home theater, new computer and install them. But the more esoteric items (the Ham radio equipment, the camera systems, etc.) will take longer to get delivered. We were, however, able to get a working Ham shack by the end of the week. Bill and I can now communicate again by radio.

The trip back was as uneventful as the trip down was eventful. We are back on Reboot waiting for a couple of deliveries and a weather window to head back to Virginia Beach.

Sailor goes on shore leave, gets in fight

The night before last XO again managed to make an unauthorized shore excursion. He returned a couple of hours later with blood on his forehead and a scratched eyeball. What is it with sailors and fights on shore leave?

I walked him the 2 miles to the local vet yesterday morning. They confirmed that he had a scratch on his eyeball and gave me some  antibiotic to make sure it doesn't get infected. They were also very kind in that they had one of the employees drop us off back at the Solomons Yachting Center.

Now the night before last (the night XO got hurt) he was pretty quiet - obviously in pain. But one would think he learned his lesson. No, last night he jumped up onto the deck squeezing through a 2 inch wide gap in the companionway boards and top and once again headed off down the dock. Fortunately this time I heard the commotion of his escape and managed to head him off at the pass.

She must be quite the kitty if he is trying so hard to go back for more!