Fair warning - the author is my brother.

After many years I was finally offered a prerelease version of Alberensa. Frankly, I was captivated. One of my favorite books is "Pillars of the Earth." Different time, different location, but the same rich texture of history with interesting and intriguing characters. What does one do to hang onto a small but critically important hereditary family holding when the very powerful want it for their own? Lots of twists and turns and a wonderful ending. I think you will enjoy it.

100 Years of Solitude and Amazon

I mentioned that I had purchased 100 Years of Solitude. What was very unusual for me is that I actually purchased the paperback. Keeping books on a sailboat is a challenge, they usually turn to pulp fairly quickly. Not to mention that they take up a lot of space. This is why every marina has a free book exchange shelf or shelves. Some have extensive offerings. I was stunned when checking into Marathon, Florida to find a library of thousands of books. 100 Years of Solitude has yet to be converted to Kindle so I ended up buying the paperback.
Amazon got a big leg up by pioneering ebooks and the Kindle format. Nots to mention Prime and Unlimited. But what have they done for me lately? The paperback deliver was late by a couple of days. Probably due to service disruptions caused by Covid-19. This morning out of the blue I got an email from Amazon. They gave me a store credit for the shipping cost without being asked. A good way to maintain customer loyalty.
Fair winds and following seas 😀
at July 04, 2020 No comments:

After many years I have decided to spend some time on my YouTube channel. Rather than a travelog it will be focused on two things: World cruising tips and hints and digital music production using digital audio workstations. You can hopefully find it and subscribe searching for Roger John Jones but if that fails this link should get you there:
https://www.youtube.com/channel/UCoXNMKhG5rSNbqGCPA3GP3A?view_as=subscriber
Fair winds and following seas 😀
at July 03, 2020 No comments:

What better way to spend my time during the Covid-19 panic than to read Gabriel García Márquez's One Hundred Years Of Solitude.
Márquez was a both a journalist and writer. Perhaps you have read or heard of another of his famous books: Love in the Time of Cholera. His works have achieved significant critical acclaim and widespread commercial success, most notably for popularizing a literary style known as magic realism, which uses magical elements and events in otherwise ordinary and realistic situations. He was awarded the Nobel Prize in Literature in 1982.
Fair winds and following seas 😀
at July 03, 2020 No comments:

I missed spring cleaning. Even worse, I missed the opportunity for pagan rituals at the summer solstice. Wine, women, song, bonfire, dance. Mea Culpa.
The weather at Royal Langkawi Marina is not conducive to getting things done that require sitting for long periods of time concentrating. The temperature runs from 80F to 95F and the humidity remains around 95%. The only window to work on Reboot is from dawn until about 10 AM when it gets brutally hot. Even more so for working on deck in the sunshine.
Over the past couple of days I have focused on cleaning up my computer and web presence. Changing old weak passwords, deleting files that are no longer relevant, and updating software (such as radio communications) that I have not used since I have not been crossing oceans. It feels good to make some progress.
Fair winds and following seas. 😀
at June 29, 2020 No comments:

I find it interesting and someone distressing how disconnected my sons are from the current riots in the United States. I spoke to the one who lives 15 minutes from downtown Madison, Wisconsin where a democrat State Senator was badly beaten and two statues were toppled last night. His response was that they were far enough away to not be concerned.
Demonstrations at the state capital were commonplace for the eight years that Scott Walker was Governor (he was defeated in the last election - Wisconsin is truly a swing state.) But they were always peaceful and clearly focused on some legislative objective. Last night's activity had neither attribute.
Not much I can do but in the meantime but worry. So I shall.
Fair winds and following seas 😀
at June 24, 2020 No comments: 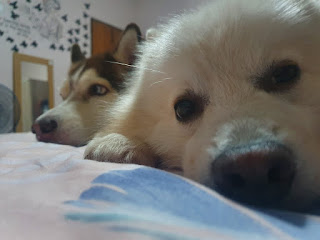 Sabrina and Charlie wait to go out!

I have no idea why it stopped working but it is now back. I feel like I am now required to do something extraordinary about that fact. Haha 😀
at June 24, 2020 No comments:

www.sailboatreboot.com has decided not to work. Now on the chat line with Godaddy to find out why. More to follow
Fair winds and following seas 😀😀
at June 24, 2020 No comments:

XO is on VACATION

XO is taking a break from his normal activity patrolling and protecting Reboot. He is visiting our friends Yoko and Brian in Kuala Lumpur. I think he is a little confused by two things: it isn't hot and it doesn't rock. He is also getting his nails clipped. Even though he has a nice scratching post he wants to do the furniture. Not happening.
XO has taken a few trips in his life. My complaint had been that the airlines - led by my favorite user unfriendly bellwether American Airlines - have been routinely raising to cost to have an animal with you in the cabin. Last I checked it was $150 per flight. What is more frustrating is that "comfort animals" (anything signed off by a medical practitioner as reducing stress) fly for free. I have no problem with service dogs to help those in need. But watching some twit woman with her rat dog just ticks me off. Anyway....
I thought it would be easy, notwithstanding Covid19, to get XO and me on a flight. Nope. First, only one carrier, Malaysia Airlines will fly a pet. And only in baggage. Then Malaysia Airlines suspended service between Langkawi and Kuala Lumpur. They had their low cost carrier Firefly fly the route. Of course Firefly doesn't take pets. OK. Take the ferry. Nope, they are afraid of a 10 pound cat too!
Finally everything came together and I was able to take XO to KL. Except first I needed a vet certificate that he was healthy and had his shots. That was actually easier to get than my certificate that I had been tested for Covid-19 and didn't have it. After an extensive paper chase we were good to go.
Showed up at the airport. Nice greeting from the gate agent who didn't know how to enter XO into the computer system. That took an hour and a number of phone calls but finally she got it done. Quiet trip. Got to KL and got XO. Now the problem was that I was not allowed to leave the airport and Brian was not allowed to enter the airport. A very nice policeman turned his back to consult his cell phone for the 15 seconds it took to pass XO over the barrier fence.
BTW the load factor on the plane was about 20% and we made an extra airport stop on the way to drop off and pickup a few passengers.
Fair winds and following seas :)
at June 23, 2020 No comments: