The South Pacific is littered with islands. I mentioned Fiji as the "land of 1,000 hazards". But in the middle of the ocean? About half way between New Caledonia and Australia there is a sea mount that actually sticks above the surface. By definition a guess it is an island but it is so small its more like a rock. It is cleverly positioned on the direct route between New Caledonia and Bundeburg, Australia. Figures.

It rained all night with accompanying wind shifts so that was no fun.  It did really bring to mind how much the weather has changed. I already mentioned that island weather and ocean weather are different. I am only 360 nautical miles south of Fiji and the change has been quite dramatic. In Fiji it would get to 95 degrees inside Reboot. By 10 AM I was sweating profusely and done for the day. I was constantly battling with mosquitos and flies. The only redeeming grace was sitting in the bar in the breeze as the sun went down, lathered up of course with bug spray. I would wake up each morning wringing wet. Now it is in the low 70's in the day and high 60's at night. Working in the cockpit at night requires warm clothing to combat the wind chill. It is a sailboat and it is usually blowing 15 to 20 knots in the cockpit.

The skies cleared by midday and the dampness started to disappear. The nicer weather got me in task mode. I cleaned the toilets this morning. It is only XO and me but I had high hopes. He looked at me with a "really? and meowed.  No help from that quarter. Then he looked at his box. Yes, I did that too. I do it every day.

The rest of the day was electronic central. I did some work on iTunes. There must be a manifest file because it is showing a lot of songs that are not on the computer. Then I did some more rtfm on my keyboard (a Yamaha PSR-S970) and practiced a bit. I am in high frustration mode. Years ago I was quite ok. Now I struggle every day.

I decided in the middle of the night to skip New Caledonia. These decisions always seem to happen at night. In the rain. With strong winds. And big seas. This time was no exception. Making landfall, or in this case getting close, always changes the weather. The land disrupts the wind and waves. The visual sight range from Reboot is 3 nm. The clouds over New Caledonia could be seen from 50 miles away. That is how the "iron men in wooden ships" found the islands in the past. I am still close enough to be affected but I can see blue skies ahead.

I have about 800 nm to go to Bundeburg, Australia. Depending on the wind this is 7 to 10 days. I do have charts but no cruising guides. I will deal with that when I arrive. The good news is that I will miss 1 1/2 weeks of election coverage.
It turns out that one of the most difficult products to find in the South Pacific is kitty litter. The vet in Fiji suggested I use chicken feed. That is what they use. It works well with one exception. It is so light that XO tracks it all over the boat. I am constantly cleaning up. So far it has all been  pretty clean litter particles.

I have been taking advantage of the nice ride (up until last night) to get more familiar with my Yamaha PSR S970 keyboard. It is a very complex instrument. I did discover how to preview instrument sounds. This was a big breakthrough as it really is the only way to translate names into sounds. I still don't have a clue how to decode the drum kit / harmony settings. I am finally past my "type A" personality and have started to rtfm. I play music for a while, get frustrated, play with the instrument, get frustrated, go back to playing music. The truth about transits is there is lots of spare time.

Question: "How do you get to Carnegie Hall?"

It is early morning. I am in utc + 12. In other words it is 12 hours earlier in London. Half of my day is spent in tomorrow (take that, Anne) until midnight catches up. For my friends and family 3/4 of my day is their yesterday (and my troubles seem so far away.) An overcast morning. I just put up the full main. I always reef down at night in case I get a storm or the wind picks up. Trying to reef in the dark while half asleep is no fun as I learned on my maiden solo voyage to Newfoundland. The wind is still very light and I am being set by the waves. My heading is 220 T and my track is 250 T. The good news is the waves have moderated to about 1 foot. It is a very smooth ride. If the clouds burned off it would be a perfect day to take friends sailing. Sit around the cockpit, have a beer or two, and shoot the breeze while Reboot takes care of herself.

I am still fence sitting about New Caledonia vs direct Australia. I still have a day to make the decision. The issue is food. I don't need fuel. I make water and electricity. The only thing I can run out of is food. I have enough for the trip even if I am becalmed for a couple of days. I am not sure after that. I will have to take an inventory today and make sure I really have a decision to make.

A frustrating day. After making good progress the wind died today. Reboot has had winds of less than 6 knots for the last 8 hours. Fortunately she is light enough that we have still been making way. There was only one short period when I had to hand steer as the autopilot could not hold course. I had to alter course a bit to stay close hauled to build apparent wind. We are still heading (slowly) in the right general direction.

I am about 100 nm from a decision point. I can turn north and head for port in New Caledonia. Or I can just continue on to Bundeburg, Australia. I don't have a strong need to make port. Hurricane season is fast approaching so I could only stay a couple of days. I might have mail (and possibly Matt) waiting but I would have to pay clearance fees. After my recent repairs my pockets are pretty empty. If the weather forecast continues for light air I will stop. If it fills back in I will continue to Australia directly.

The first day is usually trying and this was no exception. Left Vuda Point Marina with a forecast of 10 to 15 knots of wind from the southeast. Got 25 knots from the southwest - on the bow. Add a knot or so of adverse current and 3 foot swells and Reboot slogged the 17 nautical miles to the pass in the reef at 2.5 knots. Thanks to mother Yanmar and the repairs in Vuda Point everything went well with no vibration. When surrounded by reefs and other boats one is always on edge. I sighed in relief when I cleared the channel.

Reboot turned a little more west and the wind moved a little south so I was able to set sail. The wind and waves were on the beam and unfortunately the waves were running 6 to 7 feet. We have been rolling ever since.

Settling in for the transit. First project was to find all the things that were making noise. That took the rest of the first day. Now the monotony sets in. Set the alarm. Try to rest. Wake, check the boat and sky, set the alarm. Nothing to see but the sea.

Departing today for New Caledonia.
at October 19, 2016 No comments:

Sea trial successful. No vibration. Plan to depart for New Caledonia on Friday.
at October 11, 2016 No comments:

Reboot is back in the water. She was towed to a slip so that we can start the engine and align everything. Since the fuel system was taken apart to get access to the intercoolers it is a bit more, but no a lot, than turn the key.

The engine is in. The shaft is aligned. The prop is back on and the rudder is hanging. Tomorrow morning when it is cool I will put the steering quadrants back on. Then we will be ready to splash and sea trial. Since Monday is a holiday we will do it on Tuesday.

A standing joke among cruisers, "Cruisers' Midnight" refers to the propensity of cruisers to retire when the sun goes down. Since I am an early riser in have noticed that dawn here in Fiji is also early. The sun starts to light the sky at 5 AM. 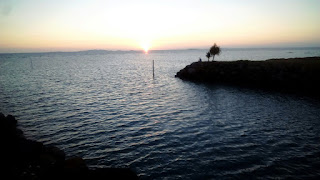 Elevator, elevator, but no shaft

It's Tuesday here in Fiji and still no shaft. It seems that the shaft for the other boat was not machined properly so it went back to be fixed. This moved Reboot's shaft back another day. So XO and I wait and bake.

With respect to the elevator, elevator comment. Back in the dark ages when I was in high school we got a very creative group of cheerleaders. Tired of the old cheers they created a number of new ones of which I remember two: "elevator, elevator we got the shaft" and "repel them, repel them, make them relinquish the ball." There were others I am sure but memory fades. This was in the early 60's and the elevator cheer lasted one game before being banned by the administration.

When the easy is hard

It was time to download new maps for my Garmin chart plotter. I learned early in my offshore cruising to postpone buying maps until I needed them. I found that there would be a new version by the time I got into the coverage area.

This should not have been a problem. And in a more connected location it would not have been. First, I had to find someone with a USB to SD card reader. One of my former crew had taken mine with him when he left. "Not a problem", he said. "Buy a new one and send me the bill." After an $80 cab ride I discovered that there were none to be found. Next step, find a cruiser to borrow one. Mission accomplished. Now do the download - 2.5 gb. Use the marina WiFi. No dice. It kept dropping. Unfortunately Garmin (who otherwise I think highly of) does not packetize their downloads. You need to get it all in one shot. Next step. Pay $33 to the alternate provider for 3 gb of downloads. After 3 or 4 tries and about 5 hours I finally got the maps. Then it blew up one more time downloading software updates for my gear. Since I had about 3 copies of the updates I was not concerned that I did not get them. But would the charts work? Did I need to start another 2 hour download? Fortunately no, the charts had downloaded intact. One more item off the checklist.