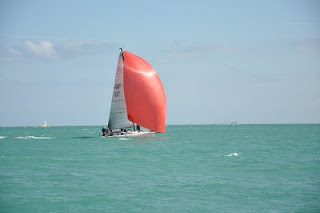 The weather over the past few days has been quite windy making travel on the dinghy to shore a bit of a mess unless you don't care about getting sopped from head to toe.  But Sunday we decided to take Reboot out on the ocean to see a little bit of the action for Key West Race Week.

There was still about 15 to 20 knots of wind and the waves were still at about 2 to 3 feet so as a spectator it was not idea.  The racers on the other hand were having a great time of it.

Since I was at the helm most of the time I did not get as many pictures as I would have hoped but I did get the opportunity to enjoy some beautiful boats.  The best, I think was watching 5 racers round the final mark no more than a couple of boat lengths apart,  They all had the high tech sails so I am sure they were pretty serious competitors.  Then the middle boat had a major fail trying to get up the spinnaker.  So then there were 4...  Great fun (if you were not on the middle boat.)

I am getting cycled up for both Ed and Kristen's visit next week and the departure for Mexico the week after.  Today it is actually warm out for the first time in a number of days so I will go over the deck fitting to make sure they are all tight and ready for the next offshore experience.
at January 18, 2011