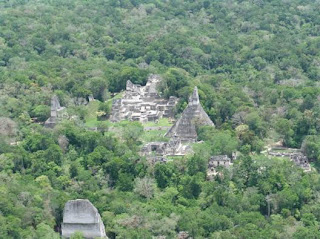 I just returned from a land trip to Flores Guatemala and Tikal National Park.  Flores is the nearest town to Tikal hence the place everyone spends the night before visiting the park.  Tikal is a major Mayan city dating from about 700 BC (so far, that is the oldest structure they have dug up.)  It covers a very large area with temples and sub-cities spread throughout the jungle.  You can get a small sense of the size of the city from the photo on the left.  I will be uploading a lot more of my personal photographs once I get a high speed internet connection.

Alan and I took the launcha up to Rio Dulce where we boarded the "chicken bus" for the four hour trip to Flores.  We started out standing which was somewhat of a concern, particularly when two very stout Guatemalan women got on board to sell food and drinks.  But it turns out this is the "local" and over time enough people got off and we were able to get seats.  We arrived in Flores in the early afternoon and were greeted by Gabriel and Gerhart who had left Texan Bay a few days early on their way back to Ramstein, Germany for the summer.  They had already found a good and inexpensive hotel.  We took a room and prepared for the 5 AM departure via minivan to the park the next morning.  We were advised to go early as it gets very hot in the afternoon.

We were greeted by a beautiful dawn as we rode to the park arriving just before the official opening at 7AM.  We paid our modest entry fee and starting walking the park. We had focused our attention at the treetops when a large group of spider monkeys decided to walk right past us on the jungle floor.  A few minutes later one of the park workers offered us the opportunity to hold a black widow spider (I declined but Alan was game.)  Then we came around the corner to the Mayan central plaza site.  There are so many good pictures and descriptions on the internet that I will not bore you with mine except to say that it was magnificent

My afternoon entertainment was to take a 12 zip line tour through the jungle canopy.  You put on a harness and they hook you up to a cable and off you go, sliding down the cable to the next platform where you climb up and do it all over again.  It was great fun until just at the end we got an afternoon tropical rain forest downpour which assured that my bus ride back to the hotel was in sopping wet clothing. .

This morning we got back to Rio Dulce and this afternoon to Texan Bay.  Alan and I are contemplating buddy boating over to Honduras later in the week.  We will see if that works out.
at March 19, 2011