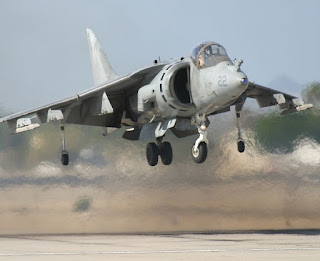 Proving that chatting up other people in bars has a positive payoff I was invited by two Marine Harrier pilots to "come and watch them drown" during their Aviation Survival Training at Marine Corps Air Station Cherry Point.  I went down with Claudia and Ed.  We had a great time.  The Aviation Survival Training Center is a big swimming pool.  The pilots, in full flight gear start by swimming around the pool.  This is designed to get them tired out so that the rest of the exercises are even more fun.  We watched:
1.  Pilots simulating being dragged by a parachute across the pool (while simulating that they had a broken arm.)  They dropped off a 30 foot high tower while the straps simulating the parachute dragged them across the pool until they got unhooked.  Oh by the way they were blindfolded.
2.  Being dropped in the pool again off the platform, dragged, and then required to get into the life raft that deployed from the bottom of their ejection seat.
3.  Being strapped into a seat and then turned upside down underwater.  They then had to unhook from the seat and return to the surface.  Phase two of this exercise was to be strapped in the seat, turned upside down, and then told that their harness had jammed.  At this point they needed to find their emergency air bottle (like a little SCUBA setup) so that they could breathe while they worked to get the harness unhooked.
4.  Survive a helicopter crash.  A good video of the simulator is at http://youtu.be/oLqXlEGxXxo
5  As a group get into a multi-person life raft. 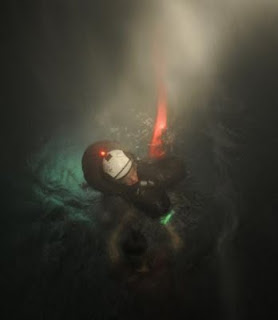 By far my favorite simulation was "Night Storm."  This exercise sounds simple but in fact is quite exhausting.  The entire pool area is blacked out.  A fog machine creates dense fog.  Fire hoses create driving rain.  A surround sound system and strobe lights simulate a thunderstorm.  The pilot who is in his ejection seat life raft signals with his strobe light for a helicopter pickup.  The helicopter drops a retrieval basket and highlights it with a spotlight.  The pilot exits the life raft and has to swim to and get into the retrieval basket.  Two things make this particularly difficult.  First, the pilot is in full flight gear which means that the life jacket has deployed.  If you have ever tried to swim with a life jacket you know how tough it is.  Second, the fire hoses are directed in such a fashion that one is essentially swimming against the tide.  If you stop swimming the water drives you back to the other end of the pool.  When the students got out of the water you could tell they were pretty tired.

We were also treated to an explanation of the current flight suits, survival gear, radios and so forth by the ASTC staff.  Led by LCDR Turner they were most gracious and we had a full and fun day.