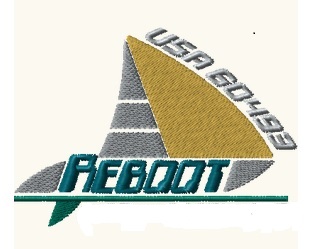 My first experience in finding crew was inviting whatever cute girl I could find to join me on my parents Sunfish. It was always a tight fit - I was 6' 6" tall. But at 14  with emerging hormones it was, as my sons would say "All good."

As I transitioned into around the buoys racing and later long distance racing finding crew was still very informal. I raced with friends and friends of friends. We were a pretty cohesive group and the trips were short enough (maximum three days) that the day to day routines were pretty easy. For example, we didn't worry a lot about cleaning or fixing fancy meals.

This all changed when I looking for crew among people I did not know. In my early career I did hire employees but by the time I was in my mid-30's I was the final decision maker. Potential employees were found by Human Resources and pre-screened by my subordinate managers. They only got to meet me for the final hire - no hire decision. I mention this because actually having to do the "hiring" was quite a shock. I really didn't know what I was doing.

Somehow I didn't realize that crewing on a sailboat was a job. I assumed everyone knew what was expected. Wow was I wrong. After a couple of trips I drafted a formal document of expectations. You can access if by clicking on the (blog page, on the right column) page "Standing Orders." I also discovered that it was difficult if not impossible to get a detailed understanding of crew skills from a phone conversation. I drafted a "Potential Crew Questionnaire." I decided this was much more comprehensive and efficient than the "job interview." You can also access this from the "pages" menu.

The two most important attributes of a crew are compatibility and synergy. (I think they overlap a great deal in a Venn diagram.) As a potential crew member you should like the people you are sailing with and share common expectations. Each crew member should also add something special. The whole should be greater than the sum of the parts. When a crew "clicks" it is the closest thing to nirvana one can find on a sailboat.

To me compatibility refers to having a similar life outlook as the others in the crew. I am not talking about political or religious views. Rather, how do you live your life? Are there dirty dishes in your sink or is the kitchen clean and neat? Are you dirty clothes spread around your house or put away in a hamper? Are you the first to volunteer or do you have to be asked to help out? Do you have respect for other peoples' possessions? These are the things that make or break a crew over a long passage.

Synergy is a funny thing. The three members of the greatest crew I have ever sailed with had very different skills. One, in addition to being a very competent sailor (she always showed up at the right place - the mast, the winch - before I ever asked) brought craft materials on board. The rest of the crew was soon making bracelets and other paraphilia to commemorate the trip. The second was a "certified marine mammal spotter." Her normal activity was watching for marine mammals on acoustic survey vessels. I thought it was pretty much BS until, on a daily basis I would hear the cry "whale ho!." It made for a very cool trip. The third member was the sushi maker. We trolled for fish. Once caught she would go to work. It doesn't get better than sea to mouth in 30 minutes or less.

Some potential crew members question the fact that I never stand watch. On many boats the Captain takes a spot in the watch rotation. I don't. The reason is that on Reboot the Captain is always on watch. When making a long transit it is unusual for me to get two hours uninterrupted rest without being called by the watch stander. This could be a sail change, a weather change, or the sighting of another boat. The early morning watches are difficult. After several days at sea just staying awake can be a challenge. By not standing watch I am free to go up and join the watch stander at any time they need support without compromising my ability to be available to everyone else. Individual boats and Captains will have their own "privilege." It is their boat and their responsibility. Grant them the courtesy to manage it their way, but make sure you understand it and are good with it.

These are things that you may want to watch out for:
Reasonable Expectations:

What is reasonable? This will of course vary from sailboat to sailboat and Captain to Captain. But some things are pretty straightforward:

Take Responsibility for what you Break:

I once had a crew member that dropped over $1,000 worth of equipment overboard. Needless to say I felt they were obligated to replace the equipment. They did not agree. They will never crew for me again. Things on sailboats break and, at least on Reboot, I take responsibility for the cost of replacement. But if you dump the dinner dishes overboard, or leave a winch handle on the deck where is gets swept off the boat, or you drive the dinghy into a channel marker I expect you to take responsibility for your actions. (And yes, crew members have done all these things to me.)

A sailboat is a work environment. You should expect the same rules about sex and drugs to apply. I would also emphasize that most countries have very severe drug rules. You may be tempted to "let it all hang out" when on a cruise. Under the rules of most countries the owner is going to lose his boat if you are caught doing drugs on board. Are you ready to buy him/her a new boat? Also, with the advent of Instagram, Facebook, and the like your antics are very likely to make it back to your home country immediately if not sooner!

You found the (maybe) perfect boat. You sailed with the (maybe) perfect crew. You have reached your destination. What now? There are three things you should do:
In addition if your voyage accomplished one of the famous landmarks - crossing an ocean, crossing the equator, crossing the international date line etc. you should definitely get the Captain to issue the appropriate certificates. Examples can be found at several sites, one is: http://tiffanypublishing.com/certificates/shellback/. I would expect that you would pay the cost of the certificate, although not terribly expensive the cost of multiple certificates can add up.