The Beaufort wind scale runs from 0 to 12.  Each number has a corresponding range of wind speeds, a description (e.g. "moderately large waves will blow foam") and a (cute) name.  I am sitting on Reboot on a mooring ball in Fernandina Beach, Florida.  My Garmin GPSMap 5212 has a system for drawing graphs of various items, boat speed, wind speed, depth, etc.  So just for yucks I decided to see what the maximum wind speed has been in the last three hours.  The answer is 39 knots or a "fresh gale."  If the wind goes up another two knots we get to a "strong gale."

It starts to get uncomfortable at about Beaufort 7 or 28 to 33 knots.  That is when you start to bounce around.  Being on a mooring ball Reboot also veers around as the wind hits the hull at slightly different angles.  Door into Summer is still on the dock.  They left the mooring field yesterday to have a technician check out the problems with their charging system.  They found out that a fuse had blown in their charging circuit.  Now everything is working fine.  But as soon as they left the mooring ball ($18.50 per night) it was taken by another boat so they are paying ~$80;00 per night to stay on the face dock, in other words on the outside of the protective docks of the marina.  Door into Summer is bouncing around against the dock quite a bit as are all the other boats in the marina.  The good news is that they don't have to try and dinghy into the marina in a 30 knot wind and 2 knot current to walk Stormy.  It would seem they are better off where they are at the moment.

Once this cold front passes thru we will head up the coast again.  We are considering just running straight to Morehead City.  We will then travel up Adams Creek to the Neuse River and on to New Bern. 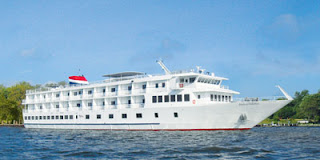 I mention Adams Creek for a couple of reasons:  The first is because it is narrow, shallow, and nasty and I hate it.  The second is because I discovered it could get nastier.  How?  Well you may remember that I almost hit the cruise ship American Glory trying to get off the fuel dock in St. Augustine. Another American Cruise Lines, Inc. ship, the Independence arrived yesterday in Fernandina Beach.  (click on the ship names to link to pictures of the ships.  I discover that they have a cruise called the Mid-Atlantic Inland Passage.  Thats right boys and girls, they take that thing down Adams Creek!  I know what you are thinking.  It must be safe.  Well, the good ship Independence just got underway in a fresh gale to keep its schedule.  I was not impressed - nor do I expect the people on board will be as they struggle with mal de mer (English -as they puke their brains out being seasick.)

(For those that wonder, a Beaufort 12 is a hurricane.  I guess Beaufort figured you were pretty much done in with a Beaufort 12 so he didn't go any further.  That task was taken up by Saffir and Simpson who created the Saffir-Simpson Hurricane Scale.  It goes from "Oh my God (1)" to "Totally Screwed (5)"  OK, I made that up.  For more on these scales, measuring Tornadoes, satellite observations and so forth see http://www.marinewaypoints.com/marine/wind.shtml.)
at April 16, 2011