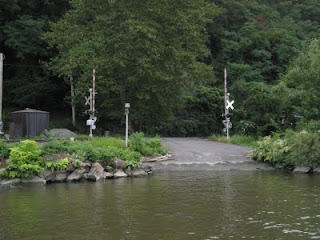 We are docked just below the US Military Academy at at Highland Falls Marina. Jerry and I intend to walk up the bluff in a little while and visit. We spent the night at a small marina in . The main marina building is a train station. A set of very active railroad tracks runs between the marina office and Reboot. We listened all night long to the sounds of the train wheels squealing around the curve. And of course they have to blow their whistle for the grade crossing. We got in last night after dark so we really didn’t get much of a chance to scope things out. This morning I checked out the “grade crossing.” It is complete with signal lights and gates. It leads down 25 feet to the boat ramp! So all night long the railroad engineers were blowing their horns to warn boaters who might be launching or retrieving their boats. LOL!

On the subject of trains when we were in Castleton-on-Hudson there was a high speed Amtrak line going thru town. We made jokes about the fact that the frequent trains were carrying graft between and . But in general they were far enough away that they did not disturb us. After we got the mast up and were done for the day we decided to go into Castleton for dinner. We ate in the only restaurant in town, actually the local tavern. The bar man/owner was very nice and the food was cheap and good. We had eaten a nice dinner – fish fry for Jerry, hamburger for me and had a drink. We were feeling very mellow and discussing a trip up the block to the ice cream shop for desert. All of a sudden we hear the sound of the train horn signaling its imminent arrival. The next thing we know the entire building is shaking, the train is blowing its horn 20 feet away out the back of the building, the lights are swinging on their chains, etc. Now this was exciting in its own right, but what was funny was that no one else in the bar reacted at all.

On the subject of trains this has been the trip of trains. Trains can’t go up steep hills and of course the rivers tend to be very flat so railroads since the dawn of time have build rights of way along the river banks. This was true of both the Erie Canal and is also true of the . We have seen a surprising amount of passenger traffic, both the – and the – route have had a lot of trains. It makes you wonder if any people are on them.

Jerry is planning on leaving me tomorrow, his mission to help me get the boat thru the finished. He will go back to until he decides to sign up for another transit opportunity. I will be taking the boat down to the area and now have to figure out where to put it. Transient dockage rates in the city are very expensive so I will anchor out most of the time. On the other hand I need access to parts and stores so I will have to bite the bullet every once in a while. It will also be a great opportunity to see my brother.

The weather has turned much colder in the last couple of days. We were sweating bullets when the sun was out on the , yesterday it did not get nearly as hot and this morning it is actually overcast and chilly. I need to get the autopilot fixed as long transits (such as to the ) would be quite difficult alone. Also the wind instruments got smashed in the lock and need to be replaced. It is possible to sail without them but they do make it much easier.

Before I forget we did see The Concept II at Castleton Boat Club. They swung around and said hi from the river. I thought they were coming in for the night but it turns out that they were continuing on down to Catskill. I continued up to the office to pay my bill and only found out later they were not docking. So we didn’t get a chance to swap Erie Canal stories.