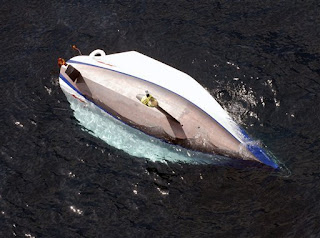 With the announcement of two deaths in the Chicago-Mac race many are asking questions about what happened.  We know that there were eight persons on WingNuts.  Five were rescued immediately a sixth a little bit later, and the two died.

I approach this story from two dimensions:  as a former Chicago-Mac racer I know that there was a great deal of safety equipment on WingNuts.  What happened that the safety equipment was insufficient?  As a single handed cruiser I also have questions about how WingNuts got caught in the thunderstorm and capsized.  IMHO thunderstorms are the most frightening events at sea.  Yes, high winds and high waves are very scary but they usually build over time giving one the opportunity to "batten the hatches" and get ready for the blow.  Thunderstorms can rise up quickly, can have very strong winds, and can chop up the wave train in ways that are very uncomfortable not to mention dangerous.

These sailors had decades of experience.  They were in their home waters.  They had sailed this particular route many times in the past.  What happened?

I hope that after the families have had a chance to grieve we will get an "after action" report from the surviving crew members that will help us avoid having this kind of tragedy happen to us in the future.  In the meantime I will not speculate on what happened.

I lost my jib in a similar incident about two months ago.  In my case I had an equipment failure - the furler jammed preventing me from getting the jib down.  The jib shredded.  That was better then it causing a capsize.  It was an event I will hopefully never re-experience.

So we will wait for more information  Hopefully we will get a detailed disclosure of exactly what happened.