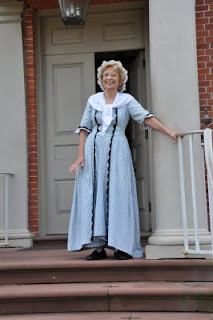 This lady is inviting us into the main building at Tryon Palace in New Bern, NC.  Their Web Site is http://www.tryonpalace.org/  Jim (Gail Force) and I took the morning to walk over from the marina and tour both the North Carolina History Center and the Palace.

The Palace was built in 1770 as the residence of the British Colonial Governor of North Carolina.  At the time New Bern was the center of the Naval Stores industry.  Alas, the Governor's didn't get to enjoy the Palace very long, the locals didn't get along with him and he had to flee for his life.

The most interesting part of the history, IMHO, is that the Palace was destroyed in a fire in 1798.  The site was also compromised in that a major New Bern road and bridge across the Trent River ran directly over the foundation of the old palace.  Starting in the late 1920's a group of very determined women decided to rebuild the site.  They found the original architectural plans.  After 30 years of effor they rebuilt the structures to those plans.  In the rebuilding process they discovered the original foundations and built the new building on those foundations.  The story continues.  This same group managed to recover about 85% of the original contents. They then augmented the building with appropriate period pieces.  Visiting gives one a perspective of the effort and love that these people devoted to the reconstruction.  If you are visiting the Coastal North Carolina area I recommend you stop in for a visit.

If you do visit make sure the docent takes you into the reconstruction history museum on the second floor of the residence building.  On the wall is an aerial photograph of New Bern in the 1950's. The attractive downtown area was a jumble of warehouses and docks.  Quite a change from today. 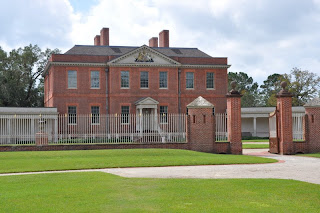