Remembering the First One 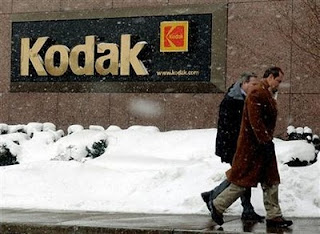 In this case my first job after college, Eastman Kodak in Rochester New York.  This week Kodak, which delivered its first consumer camera in 1888 lost 57% of its market value from $$468.2 million to close to $200 million.

The sad part is that Kodak has been losing market share for years having completely missed the digital revolution.  The company has not made a profit in several years and the rumor is that they are going to file for bankruptcy.

Kodak was perhaps at its peak when I went to work in the ECM&U (engineering, construction, maintenance and utilities) division in Kodak Park as a maintenance engineer.  Kodak was justifiably proud of its history.  They were heavily involved in the US Space Program and provided the film that was used in the Apollo missions to the moon.  I left to join the Navy in late 1969.

Companies come and go, rise and fall, but for me hearing this news was sad.
at September 30, 2011