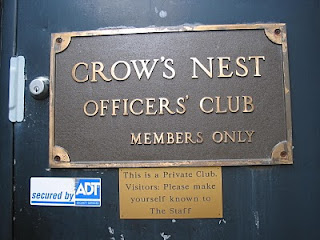 I was taken to the Crows Nest last night.  This is a (formerly private) officers club in St. John's.  Founded in the beginning of the Second World War as a refuge for the officers supporting the convoy traffic it has remained open and a private club since that time.  With the dramatic reduction in the number of military officers the club has opened its doors to visitors.  The membership requirement is now also "an interest in maritime affairs."  If you are St. John's don't be put off by the private club signs, just go in and introduce yourself to the staff. 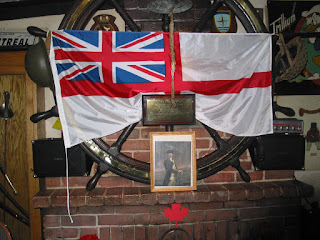 The club is less a club than a museum.  Plaques from many of the ships that have called at St. John's adorn the walls.  Models of Canadian Forces aircraft hang from the ceiling.  In fact the club has so many artifacts that most of them are put away in storage.  The best piece is a WWII U-Boat submarine periscope.  At the end of the war a U-Boat surrendered off the coast of Newfoundland.  It was towed into St. John's.  After the Canadian Forces had reverse engineered the boat it was sunk off the coast.  However, someone managed to snag the periscope and forward it to the club.  So one can now peak out from the Crows Nest and view the harbor.  This actually happened during WWII when a U-Boat crept up to the entrance.  While the submarine net was lowered to let in some traffic the U-Boat fired torpedoes into the harbor.  Apparently they missed everything and hit the shoreline.  It reminds me of the line from the movie (I think it was the Wackiest Ship in the Navy) "sighted ship sunk truck."
at August 21, 2010