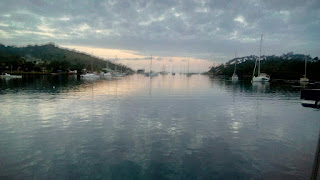 We had a delightful 4 day transit from Neifu, Vava'u, Kingdom of Tonga to Savusavu, Fiji. Our entire time in Tonga had been accented by almost daily rain. We expected to have rain on the transit. We left under cloudy skies and once out of the island influence the skies cleared. We had beautiful clear skies all the way to Savisavu. Winds were consistently about 20 knots. We set the whisker pole and had a fast downwind run. We arrived early on Sunday morning (bad planning, it meant we had to pay overtime to check in.) We started the engine for the final approach but the winds kept shifting so we were able to sail. Then, for no apparent reason the engine overheated. (Rule 7) We shut it down and continued to sail. At that point the wind died to zero. I took advantage of the calm to go down and see if the engine had overheated from a lack of sea water flow. All of a sudden the boat healed 15 degrees. We had gone from zero wind to 20 knots in 5 seconds with a major shift. Now rather than tacking in 5 knots of wind up the harbor we were close hauled doing 5 to 6 knots. We made the last 4 1/2 nm with aplomb right to the marina entrance. At which point we were stuck. The wind was coming right down the channel (Rule 2). We had dropped the main and with only the headsail we couldn't tack enough to make any progress. With 20 knots of wind I was not enthusiastic about putting up a triple reefed main and trying to work our way through a crowded anchorage under sail. We dropped the hook and call the Copra Shed marina. They told us they will send out a tow.

After a bit out comes a small hard dinghy with a 15 hp outboard and a towing post. Fio hooked us up, we raised the anchor and off we went into the 20 knot wind. Slowly. After a few minutes he stopped and told us to drop the hook again. He explained that we could not proceed further without "free pratique." We would need to have our health inspection before we could proceed. The inspector was ferried out to Reboot. We were cleared. We laughed that I had to pay $80 Fijian for him to spray Reboot with mosquito spray. At that point we could have proceeded to a mooring but with the wind up it was decided that we would ferry the remaining officials out to Reboot. This took about 3 hours and we were officially in Fiji.

We were then towed to a mooring and settled in. More about that in my next post.