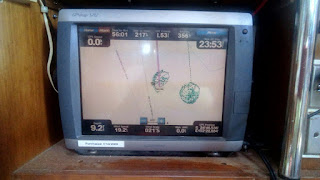 Reboot is experiencing the "tilt." I am anchored in a river. Reboot is under three influences: tide; wind; and current. The multifunction display chart has been keeping track of my position since my arrival. The right circle is prior to my biosecurity inspection, the left after I returned.

You can see that we swing around a lot. In absence of other impacts Reboot aligns with bow to the wind. She does have a tendency to sail around her anchor but in general stays in a single direction.

What makes life interesting here is when the current and or tide effect is strong and different than the wind. Since the hull is in the water which is much more dense than air Reboot tends to align with the current. This can, as it is right now, put the wind on the beam. Since Reboot is locked in direction by the current the only thing she can do is heel. With the current winds at 20 -25 knots the heel is quite apparent. As the tide changes we will spin around to a new alignment hence the circles on the chart.