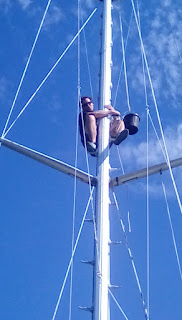 Reboot finally has a working radar again. When arriving in Brisbane the radar failed. In addition the mast bracket came loose. I shipped the unit off to Garmin™. They replaced it promptly with a refurbished unit with a one year warranty. I love this company. They have treated me exceptionally well. The problem was how as a solo sailor I was going to get the new unit up on the mast.

Enter Manuel, my new crew for the trip to Cairns. Together we could do this. And we* did. But it took 6 hours on the mast. First we had to find new fasteners. That took four stores and several hours. Although Australia has decent stores they don't carry the diversity of stock found in the U.S. We finally found a specialty fastener store that carried the right size. Then we discovered that the old fasteners for the bracket did not want to come out. After several failed strategies we borrowed a hacksaw from the marina and cut them out. (Yes, Reboot has a hacksaw somewhere, in some locker ...) Next was getting the new pop-rivets to " pop. " We didn't have the hand strength with our tool. After several more ideas back to the hacksaw. Finally we got the radar mounted and new wires run.

We turned it on. Nothing. Oh cr$%p. Out comes the voltmeter. Hum. 4.1 volts. Not good. Opened up the inline fuse holder. Not shiny. Bad. Pencil eraser on the fuse and contacts. 12.4 volts. Power up. Voila! Radar!

With special thanks to Sydney Port Transit Services for announcing a "no wake, no wash" zone while we were up on the mast. And a special place in hell for the cigarette boat idiots who came through the mooring field at full throttle. Twice!

To nephew Bill bemoaning his trips to Home Depot ™ to fix his dryer. You have no idea how well of you are.

* In all fairness Manuel was the "we." I tended the safety line and provided sage advice. Haha.