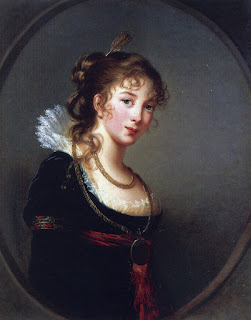 After great demand (one reader.) Hope I finally got it right. The fourth picture.

Hyacinthe Gabrielle Roland, a French actress (and possible prostitute) who like "the Polastron," escaped the Revolution.  She married Richard Wellesley the first Marquis Wellesley, after they lived together for quite a while and had a few children.  One of same, to wit Anne Wellesley, is in Queen Elizabeth's (and therefore Prince Chuck's and Duke William's and Prince George's line, via her mother the Queen Mother's mother's.
Princess Frederica (or Fredericke) is in a private collection.

The self-portrait is at the Kimbell Art Museum in Fort Worth, Texas

Hyacinthe Roland, the Queen's ancestor, is the Legion of Honor building of the San Francisco Museum of Fine Arts
Fair winds and following seas :)