Last evening Quana, Andrea, and I went to see Carmen Moto's Spanish ballet Aire. We all enjoyed the show a lot. My only compaint is that the theater has almost no rake and very high seat backs, I had to sit up straight the entire time (as those who know me will report I never sit up straight!)

But first we were off to the beach in Los Cristianos, Tenerife. The drive down from Santa Cruz was quite long, Los Cristianos is near the Tenerife Sud airport - I did not realize just how long the island is. 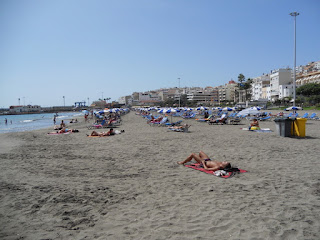 The water was much cooler than I expected but very pleasant for swimming. The sand is very fine. I took a mask and snorkel out into the surf. The water was clear but many small sand particles in suspension made the visibility only about 6 feet.

The beach itself was hot and as the tide came in we were chased from our original location to another spot further back on the beach.  My biggest concern was that I would get sunburned and have a miserable time later in the evening. I lathered up with SPF 50 and it worked out OK.

We stopped for drinks to cool down and then the girls did the quick change at the back of Andrea's car into their dinner outfits. We went off to a nice seafood restaurant and had lobster for dinner. Since Andrea was driving I have no clue where we went.

Then on to the Mare Nostrum resort to see Aire. Of course after the show we needed a nightcap so following the sound of loud music we find an English pub.It was actually a complex of several rooms each that had an entertainer.  The room we were in had a change of acts from an Irish guy singing 60's and 70's songs to another guy singing 50's songs. I didn't think it possible to be in a room where everyone else (except of course Andrea and Quana and I) knew the words to the music. The average age must have been 75!

On to goofing around in the streets, then the long drive home. Andrea and I share a common problem, in the middle of the night on a deserted highway holding the speed down to close to legal is a bit of an issue. Even so, it was still a good hour to get back to the marina.