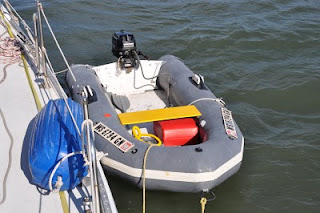 After several months of not needing to have the dinghy in the water I realized today that I was stuck on Reboot unless I get it up and running again. There was some concern that the engine would not start as it has not run in 6 months but after a few pulls it came to life. It did put out a bunch of smoke (its a two cycle) for the first couple of minutes but then cleaned up nicely. I did several laps of Reboot to make sure it would not die and then headed for shore.
One of the most annoying things about modern day cruising is that everyone has their hand out - in the instant case I was charged $10 to use the dinghy dock for 24 hours. The good news is that I got to use the showers and laundry. Of course I had to pay for the washer and dryer so why is $10 a good deal?
at December 18, 2010