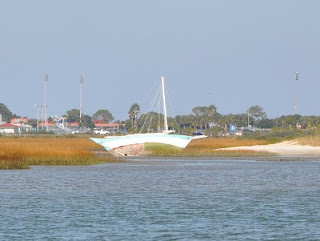 Sad: When you have been stuck in a port for a while you have a pretty good idea what is old and what is new.  This morning as I went out on deck I noticed this sailboat aground.  I think it was there last night but not the day before.  I looked through the binoculars and could see that there is still a mainsail on the boom.  Hopefully someone has contacted the owners and they will get it afloat again before additional damage is done.

Strange: Yesterday as I was dumping the garbage in the Municipal Marina dumpster I overheard a conversation about a sailboat about 15 miles offshore that was taking on water.  The local responders had attempted to go out the inlet in a small RIB but were driven back by the wave action.  Their 65' boat did go out as did an 85' USCG cutter and a USCG helicopter.  The helicopter dropped a dewatering pump The 65' boat reportedly did not have enough power to take the sailboat in tow so the USCG cutter was enroute to bring them in.  This morning my friend Bill (KI4MMZ) called me to tell me that the dewatering was unsuccessful and the Coast Guard was towing the sailboat to Ponce de Leon Inlet.  Now here is the strange part.  The people on board said that they had grounded in the ICW and then taken a wrong turn and ended up in the Atlantic Ocean.  Since they were at least 15 miles offshore and out of the sight of land I wonder when they caught on that they were in the wrong place?

Email ThisBlogThis!Share to TwitterShare to FacebookShare to Pinterest
Labels: SAR