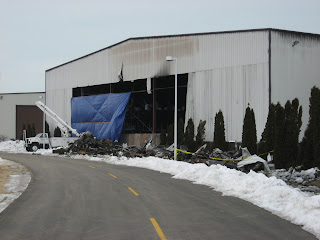 I finally bit the bullet and drove down to Skipper Buds at North Point Marina. There is no question that there was a fire, the smell hits you long before you make it to the entrance. I was treated politely but told that there was no one at Skipper Bud’s authorized to make a statement.

The fire was in the cold storage building of the facility. It was discovered when a fire alarm went off. An employee checking on the fire alarm confirmed that it was not a false alarm. All of the fire suppression equipment in the building – and Skipper Bud’s is proud of the investment they have made in fire suppression equipment – worked, as far as anyone is a position to know, exactly as it should.

The final count:
3 boats totaled
108 boats in the building at the time of the fire
1100+ boats on the property.

One responder was injured when he slipped on an ice patch.

Work continues on fixing the building and treating the boats that were in the building for smoke and water damage. I was told that there is every expectation that all the boats will be ready to launch by Spring.

The picture is as close as they would let me get to the building!
at February 22, 2008