The report of my death 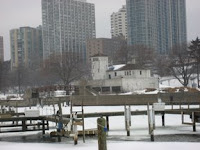 "The report of my death was an exaggeration." Mark Twain

As the picture shows - The Coast Guard lifeboat station is still there folks! Perhaps the snowfall has prevented the planned demolition. Demolition was slated to begin February 25 according to the Journal Sentinel. It has been an eyesore for years, I suppose a few more days will not matter.
at March 03, 2008