Why I love sailing 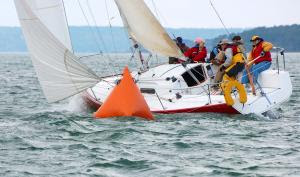 Why I love sailing, from Sailing Anarchy (http://forums.sailinganarchy.com/index.php?showtopic=69285&hl=)

"I know it's a local interest story, and we are just a little bunch of 4ksb pilots in a remote backwater corner of Dumbfuckistan, but the the guy in the yellow hat trying not to hit that mark just spent over 14 months fighting through chemo, radiation, bone marrow, stem cell, blah, blah, blah so he could go sailing again. He wanted his boat and his crew to keep sailing, so the other guys in the fleet took turns guest skippering in his absence. Saturday, he crewed up with a couple of sailing friends and some grandkids for his first run since November of '06 and they got the gun in the first race. I was on RC duty and had the honor of firing it. They didn't save their time, but nobody cared. It's the first time in a lifetime of sailing that I've teared up watching a friend cross the line. Great guy. Great times.
GO THE DRAGON!"
at March 17, 2008

Email ThisBlogThis!Share to TwitterShare to FacebookShare to Pinterest
Labels: News