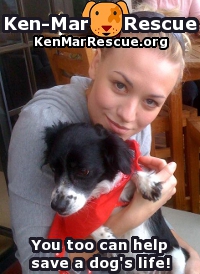 Well, my month is up.  Now it is true that I don't have to return a video camera within the time frame for the money back guarantee but one can only carry a quest so far.  After all, I have sailing, partying, diving and drinking to do.  (Not to mention the ever so frequent and unpopular boat repairs.)  I understand that things didn't quite work out for Brian during his 30 day quest either; he thought he had failed and then several months later Brook actually contacted him and they met for lunch.

I have discovered that Miss Strahovski is a supporter of the Ken-Mar Rescue organization in Los Angeles.  I presume that she has a soft spot for dogs, particularly those in need of rescue.  So I want Miss Strahovski to know that in addition to being a sailor (with all the faults that implies) my friends would tell you that I am a dog very much in the need of rescue!  This nom de plume goes all the way back to my high school days when Lou Christie's Lightening Strikes